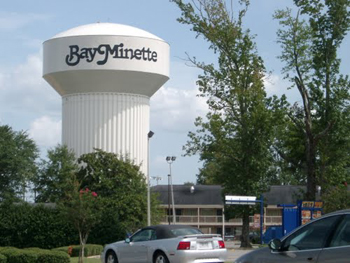 Nestled in the pine forests of north Baldwin County, Bay Minette is conveniently located 35 miles northeast of Mobile, Alabama, 45 miles west of Pensacola, Florida and 75 miles east of Biloxi, Mississippi. Because of its favorable location, it enjoys the economic, social and cultural benefits of the surrounding urban areas while maintaining the charm and relaxed pace of a small southern community.

In September 2011, the town attempted to enact a program called “Operation Restore Our Community”. It would have allowed those convicted of a misdemeanor to substitute imprisonment with mandatory church attendance for one year. However, this program was challenged due to violating separation of church and state and the program’s start was delayed for judicial review. It appears to have been scrapped.

Portions of the movie Close Encounters of the Third Kind were filmed near the town’s Louisville and Nashville Railroad depot, and Friday the 13th Part VII: The New Blood was filmed in rural portions of Baldwin County near Bay Minette. In addition to being home to a thriving timber industry, our surrounding forests serve as a playground for the southern sportsman, as does the nearby Tensaw River Delta and the waters of the Gulf of Mexico. Bay Minette is also surrounded by restored Civil War and early American history sites perfect for history buffs, family picnics, hikers and campers.

Bay Minette has enjoyed steady, managed growth for many years. As the seat of Baldwin County (the second fastest growing county in the state), our residents enjoy many employment opportunities through local government, the county board of education, as well as legal and other professional offices, which support the county government.

Home to the largest employer in Baldwin County, Bay Minette also offers residents employment opportunities in manufacturing and industry. In addition, the city actively seeks new employers through partnerships with the Baldwin County Economic Development Alliance and the North Baldwin Chamber of Commerce. There are approximately 8,500 residents living in the city limits of Bay Minette and an additional 20,000 beyond the city limits who call North Baldwin home.