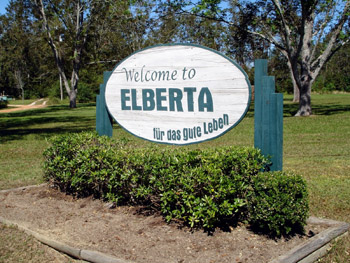 Elberta was founded in the early 20th century by a Chicago-based land company. The Baldwin County Colonization Company was organized in 1903, and the first settlers arrived in 1904. The community was founded by farmers who had immigrated from Germany to the Midwest of America. The land company advertised the area as having rich soil and a climate that allowed year-round farming. The first two organized churches were Lutheran (1908) and Catholic (1905).

The land company laid out Baldwin County in the manner found in the Midwest; that is to say, roads were laid out on section lines that were due north-south and east-west. Property, especially farms, were laid out in squares. With the immigration taking these farmers through Ohio, Indiana, Illinois, and other Midwestern states, the early years of the community resembled Midwestern farming communities more than those of the Deep South. In the 1930s through the 1940s, the town boasted a farmer’s hall where dancing and singing were enjoyed, a hotel, and a movie theatre, as well as a butcher shop, grocery and drug store. Many of the residents spoke German, and St. Mark’s Lutheran Church offered German-language services until 1976.

The State Bank of Elberta was incorporated in 1922. The bank was unusual in that it did not close during the Great Depression. The town was incorporated by vote on December 9, 1952. To support the town’s volunteer fire department, the Elberta German Sausage Festival was started in the mid-1970s. This event is held the last weekend of March and the last weekend of October and features polka music, Elberta German Sausage, and 250 arts and crafts vendors. In 2014, the October festival saw an estimated 40,000 visitors.

The town is the home of the Baldwin County Heritage Museum. The museum is located on U.S. Highway 98 east of the town. It features exhibits devoted to the development of Baldwin County. The museum includes a large amount of farm equipment and exhibits of life in farm homes. The old St. Mark’s Lutheran Church building was moved to the grounds and restored.