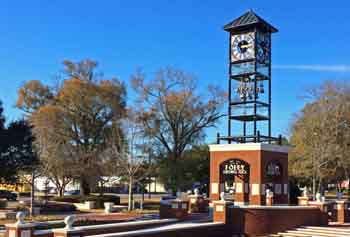 Foley was named for its founder, John B. Foley of Chicago. As Foley was traveling to President McKinley’s funeral in 1901, he met a railroad agent who told him of the area in South Baldwin County. Foley came down the following year, and he liked what he saw and bought up between 40,000 acres (160 km2) and 50,000 acres (200 km2) of land. He then returned to Chicago and formed the Magnolia Land Company. As he began to sell off acreage, he realized the need for a better way for the people to come to Foley.

Foley used some of his own money to lay the rails so the train could come from Bay Minette. The first railroad station was built in 1905. The original station burned in 1908 and was replaced the following year by the station that is now the City’s museum. John Foley donated parcels of land for a school and churches. These included the current Catholic Church, Saint Margret of Scotland, the Baptist church and the Methodist church. The first train to service Foley was a wood burner called the “Pine Knot Special.” It would leave Foley in the morning and make a return trip in the afternoon.

As people cleared the land, they would place liter knots in a wood box for the engineer to use as was needed. Foley was incorporated in 1915 with G. I. Weatherly serving as its first mayor. The City of Foley Antique Rose Trail features over five hundred varieties of fragrant roses. The City of Foley Museum & Archives and Model Train Exhibit is located in a restored train depot from the early 1900s. It holds archives for the City of Foley as well as railroad memorabilia. With an assortment of restaurants, an 18 hole golf course, events and attractions, there is something for everyone’s interests in Foley, Alabama.