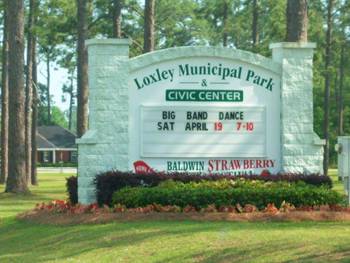 In 1870, a man from Chicago by the name of John Loxley established a lumber camp in the area previously known as Bennet. The lumber camp included a commissary and saw mill. The men that traveled with Loxley settled in what later became the town of Loxley. John Loxley returned to Chicago when the lumber was exhausted.

The train depot opened on May 5, 1906, on the Fort Morgan Line. Before that there were only wagon roads to Bay Minette. Also in 1906, the Loxley post office was opened in by Octavia Sauer. She served as the postmistress and depot agent. By 1920, the businesses in Loxley consisted of an egg store, grocery store, two general merchandise stores, train depot, drug store, telegraph office, land office, repair garage, post office, bank, hotel, butcher shop, orange packing shed, cement block plant, a blacksmith, a feed and lumber store. A grammar school was built in 1925.

The Town of Loxley incorporated in March 1957. Loxley hosts the Baldwin County Strawberry Festival every spring.Since 1986, It has grown from a few crafters and food vendors, to over 160 arts and craft exhibitors, a dozen different food vendors, an exciting carnival, wonderful children’s games, antique auto show, animal riding and petting exhibits and live music. Of course, strawberry shortcake is still king!