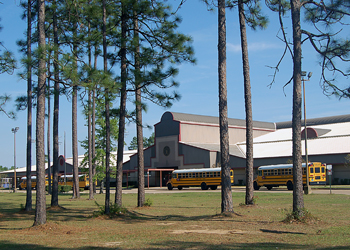 If you are thinking about locating to Daphne or have already moved here, you will find that it is a “city on the move.” Despite its consistent growth, Daphne has been able to maintain the ambience of a small town where the people are friendly and caring, and newcomers soon become good friends.

Historical records indicate Spanish explorers discovered this area as early as 1557. Records also indicate April 9, 1874 as the actual establishment of the town that would be Daphne, with the designation of a Postmaster and official Post Office for the Community at that time. Museums of the area include The Old Methodist Church Museum of Daphne, the Black Education Museum and the Alabama Sports Museum & Archives. The City of Daphne was ranked 96th in the “Top 100 Best Places to Live” by CNN/Money website.

Daphne is perhaps most famous for being one of the few places in the world to experience the phenomenon known as a “Jubilee”. This event brings blue crabs, shrimp and fish into the shallow waters of the shoreline, just waiting to be scooped up by those waiting to fill their ice chests. Thus giving Daphne the title “The Jubilee City.” “Jubilee” – generally considered a time of great rejoicing – holds a special meaning around Mobile Bay on the Eastern Shore. To folks around Daphne and the rest of the Eastern Shore, it means a “phenomenon” which brings blue crabs, shrimp, and fish swimming from the depths of the bay into the shallow waters of the shoreline. Generally, the bottom fish, such as flounders, catfish, and stingrays, are the most affected. Crabs are almost always a part of the event.

The phenomenon in Mobile Bay has been studied very little. However, scientific evidence and local “folklore” observed that Jubilees occur only in summer months, usually in the early dawn hours before sunrise. The bay is usually calm or slick on the previous day and during the Jubilee. The wind is usually gentle and from an easterly direction on the day before and during the Jubilee; a change in wind direction will stop a Jubilee. There is usually a rising tide during a Jubilee; a change to a falling tide will stop a Jubilee. The sky on the previous day may be cloudy and overcast. The theory is that each year tons of leaves, plants and wood debris are brought into Mobile Bay by waters from the Blakeley, Apalachee, Tensaw& Mobile Rivers. This material settles to the bottom of the bay and decays.

During summertime, decomposition is accelerated and the oxygen supply is rapidly depleted from the layer of salty water along the bottom of the bay. This loss of oxygen occurs generally when the waters are calm and the east wind blows oxygen bearing surface waters away from the eastern shoreline of the bay. When this occurs the tide moves in and brings saltier bottom waters which are devoid of oxygen near the shoreline.

Meanwhile, locals make ready lanterns, giggs, scoop nets, buckets, baskets, tubs, canvas sacks, or whatever it takes to harvest the anticipated bounty of seafood. As the tide comes in, the bottom dwelling fish, shrimp, and crabs are forced to move into the shoreline and are eventually trapped in shallow water at the beach where the locals are waiting to shout “Jubilee!” The waters come alive with a variety of seafood that can be scooped up by the tub-fulls to be frozen and enjoyed all year long. As dawn comes and the sun rises, those fish not caught, revive with oxygen to swim to safety once again in the beautiful bay. For those who may disbelieve . . . this is most definitely not just another “Fish Tale!”
Welcome to Daphne, the “Jubilee City,” a community rich with heritage, pride, nature, small town neighborhoods, hometown spirit, progress, and of course . . the only place in this part of the world that has the adventure of a JUBILEE!